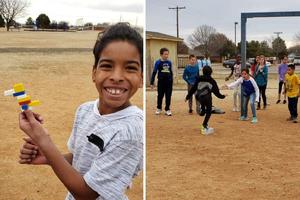 Fourth graders at North Ridge Elementary went outside and enjoyed a relay race to learn about the Earth’s surface.

Students lined up in two teams. In this race, the students had to break off (weathering) one Lego (rock/sediment) from the formation at their starting point. Then, they ran to move the Lego (erosion) to another formation across the track. Once there, the students set down the Lego or built upon the existing Lego (deposition) formation. Then they ran back to the starting line and tagged the next student. Once all the pieces were moved, the relay race was over.

Science teacher, Luis Martinez, said, “Science is all about hands-on learning and what better way to engage the students with the concept of changes to the Earth’s surface than to get moving and have some friendly competition. This relay race helped students demonstrate the processes of weathering, erosion, and deposition in one activity outside the classroom. Students had a blast racing and competing against each other but also were able to tie back their learning to the physical movements of the competition.”